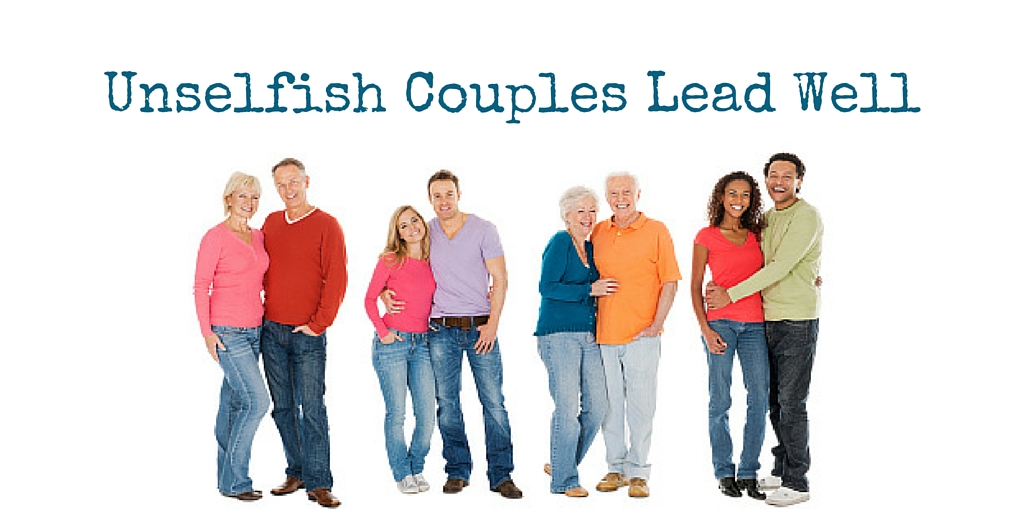 Unselfish couples are generous. They’re aware of needs, and work toward making their world better. Nothing demonstrates unselfishness like two people, working together for the good of those around them. They are unselfish couples, leading by example.

Robert and I are inspired by these unselfish couples: husbands and wives living meaningful lives.

So what’s the definition of the Value of Unselfishness?

Unselfishness   – acting generously; regarding the welfare of others before oneself

Here’s a post originally written for our Leadership Couples site… it gives you an idea of how this Value shows up in a marriage relationship, highlighting 3 unselfishcouples.

Leadership couples are generous with their talents, resources, and time.

They embrace the Value of Unselfishness – acting generously, and regarding the welfare of others before oneself.

There are couples we can honor from the past. There are couples active today we can applaud. And if we continue to encourage the value of unselfishness, there will be leadership couples into the future. Thanks to the many talents of Charles & Susannah Spurgeon, they have left a legacy that lasts to this day.

Known as the ‘Prince of Preachers’, Charles was the Billy Graham of his time. During the second half of the 19th century, it is estimated that Spurgeon preached the Gospel of Christ to 10 million people.

In spite of nagging health issues, Susannah demonstrated the admirable qualities of a supportive spouse. She also used her talents to get books into the hands of hundreds of poor ministers across Great Britain, who otherwise had no resources to increase their knowledge or improve their ministries. Her now famous Book Fund continues to this day. Barbara & Pitt Hyde are serious philanthropists. Through the Hyde Family Foundations, they focus their significant resources on cultural, educational, and economic growth in their hometown of Memphis, Tennessee.

A native of Memphis, J.R. (Pitt) Hyde III is the founder of AutoZone, a leading automotive parts retailer. He is also the grandson of the founder of Malone and Hyde, the third largest wholesale food distributor. Pitt’s grandparents started the Family Foundation in 1961 and Pitt’s business ventures have afforded the opportunity to significantly expand its reach.

Through their Foundation, the Hyde’s provide support to many different schools in Memphis, including public charters, private independents, and inner-city parochial schools. This year they also made a sizable donation to the construction and development of a bike and pedestrian crossing at the Harahan Bridge, crossing the Mississippi River.

The Hyde’s have also made considerable investments in the National Civil Rights Museum, the Ballet Memphis, and even helped bring an NBA team to Memphis (the Grizzlies).

In the growing category of husband-and-wife teams in philanthropy, Barbara comments:

“It is one of many things that Pitt and I have in common and we love to talk about. Neither of us plays golf, for instance. We’d rather do this work together.” Kait & John Seyal love their dogs, adopted from an animal shelter. They unselfishly wanted to raise awareness about animal rescue and pet therapy.

So they decided to give up 9 months of their lives and walk coast to coast across America.

On March 1, 2012 Kait, John, and their 2 dogs – Max and Grace – began their 3,000+ cross-country journey from Lewes, Delaware. Along the way, they stopped to volunteer at hospitals, nursing homes, children’s homes, veteran’s facilities, and anywhere else the unconditional love of a dog was appreciated.

Reading the comments on their website Dog Walk Across America, not everyone was supportive. But this husband and wife team persevered.

They walked alone for the first 1,100 miles. Then a friend and his dog joined them, providing a support vehicle to give the dogs a place to rest during the hottest hours of the day.

On November 17, 2012 the team reached the Pacific Ocean, at Long Beach, California. They achieved their goal and proved that they can make a difference. Who do you know that lives the Value of Unselfishness – could you include them in this list of unselfish couples? Leave a comment!

How can you use the value of unselfishness to make a difference?

I’m putting these posts – “A to Z” Values – all under the FAMILY portion of this site. Why? Every one of these Values words will be a blessing to each spouse – but more than that… they’ll benefit your whole family!

Imagine if you and your spouse began to lead using the Value of Unselfishness – what kind of impact will that have on your family? On your children? I’m guessing that your children and family will only benefit as they watch the two of you standing together – contributing to the greater good of everyone around you.

This is part of an Instagram challenge for July 2016 – A to Z and a few numbers… ( check out our Instagram account) and it’s become a series of Values posts!  The posts in this series can be found on the PAGE – 27 Values to Enrich your Marriage  (BTW – If you’re reading this post before the end of July 2016, then the page isn’t complete… I’m still writing! 😉 ) Discover Your Values as a Couple

How can you make sure those values you live – together as husband and wife– are consistent, cohesive, and have a lasting impact?

Values help you prioritize - decide when and what to do in a situation, and then remain consistent in all your decisions.

Check out the guide and workbook for couples!