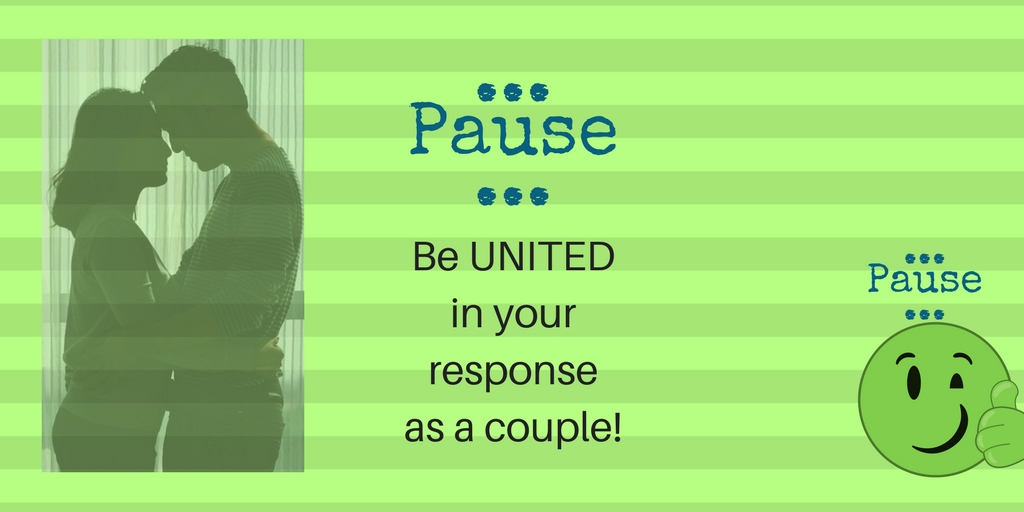 United Response… Why? Because any response or decision you make impacts your spouse!

PAUSE for a united response to show respect.

Build respect with your spouse by waiting to discuss issues before responding. Use the “pause button” before you respond to others.

7 more WAYS to be united:

Obviously, responding together after discussing an option or situation is one way of being united. But what else could you do?

Being united strengthens your family.

This world we live in isn’t an easy place to be. It’s filled with so many pitfalls. Too many couples succumb to one hazard or another, and their division causes pain. The pain isn’t just felt for the two of them, it’s also felt like a ripple effect. Children are hurt when couples are no longer united. Parents of the couple suffer when two people choose to no longer be united. Even friends can feel great pain when their couple friends are no longer united.

Unity impacts more than the 2 of you – it also strengthens your family. #marriage

Please – give some thought to the areas in which you are not united with your spouse.

And address those areas.

That is why a man leaves his father and mother and is united to his wife, and they become one flesh. …on being united in finances…

Thomas C. Corley researches and writes about the habits of those who are rich. This post was spot-on for Robert and me. He talks about loyalty ( that’s one of our Values) and being supportive and optimistic…

Have you seen our video about #93toJOY?  We had so much fun recording it…  It’s about doing 93 days of little activities together that don’t take much time or money. #93toJOY is about addressing those days, months and years that aren’t easy…  Learn more HERE