Two Into One – You’re Not Alone 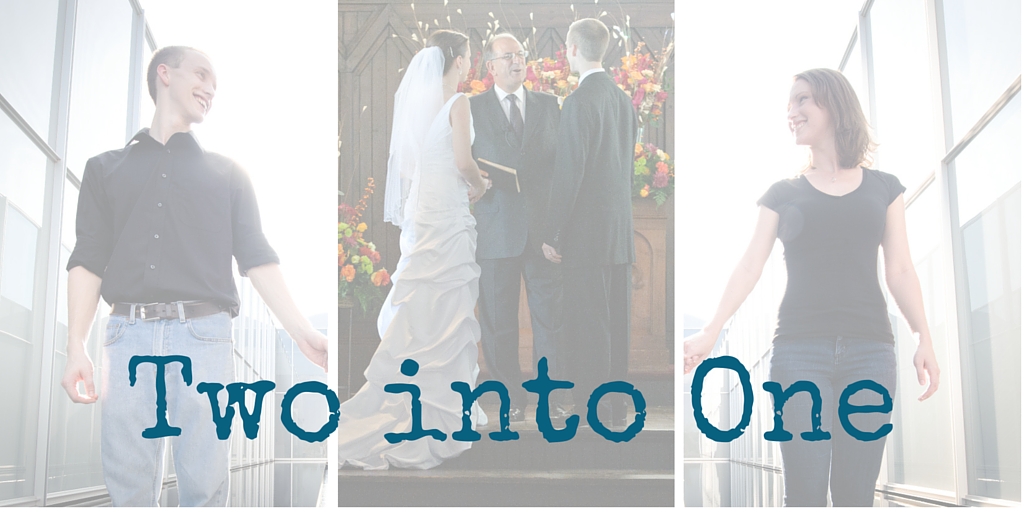 Does this two into one until you die sound daunting? (Don’t worry – when I put it like that, it sounds scary to me too!) It doesn’t need to be scary or daunting. Now there’s a couple who led an interesting life… One led a life in front of the masses, and the other had a peripheral presence. (Not less. Just more quiet.) They were two people into one, even though great stretches of their life was spent apart. They definitely exemplified the Value of ZEAL. — (Robert and I visited Billy Graham’s Library near Charlotte, North Carolina a few years ago.You can read about our experience here.)

What does Two into One mean?

What I’m describing comes from the Bible – Jesus is answering a question from the Pharasees about divorce. Jesus responded with this statement:

But from the beginning of creation, God made them male and female. For this reason a man shall leave his father and mother, and the two shall become one flesh; so they are no longer two, but one flesh. What therefore God has joined together, let no man separate.  ~ Mark 10:6-9

I recommend you read the first part of Chapter 10, in the Gospel of Mark and Ephesians 5 to explore this concept. I’m not a Biblical scholar, so if you have questions, I’d suggest opening a conversation with your local church pastor and discussing the concept with your spouse. It’ll be an interesting conversation.

For this concept let’s just focus on one phrase:

No longer two, but one flesh.

You two people – joined as husband and wife, encouraging each other, so your life together will make a difference in this world…  what would this look like?

The two of you are honoring your vow. This is huge. It carries much more importance than you’d believe… You two stood before God and a group of people and made a promise to live life as a couple. Married. Two into one. And… You. Are. Living It. You’re bringing honor to the role of husband and wife. You’re demonstrating the Value of Loyalty. Your union isn’t just about your wedding “day” – rather, it’s about your life together! Your children, your family, your  neighborhood, and communities can look at the two of you, living your vow, and can be inspired. Please. Don’t underestimate the importance and weight of living your vow!  A vow has united two into one.

A vow has united two into one. #marriage

The two of you have developed your own – shared – outlook and opinion on topics which impact your own family and life. It probably won’t be easy. Or simple. It might go against your parent’s views – but the two of you have the courage to bond as a couple, leaving the households which raised you. It might not be popular. This journey of developing your shared outlook and opinions might take your entire life, and be an ever-changing task. Regardless. Even the journey to develop a shared vision is uniting two into one. Those opinions and outlook have united two into one.

Opinions and outlook have united two into one. #marriage

The two of you are working on shared goals. One might be out front – the other quieter – but you’re working on something greater than the sum of two of you separately. You have a shared passion – the zeal to make a difference. Robert and I have been inspired by couples united in a desire to find a cure for juvenile diabetes. We’ve seen countless couples in business together. working to make a difference not only in their own lives, but in the lives of their employees and the community also. (I just went to a blogging conference, and there were at least three couples working together on a blog the wife began, and now the husband has quit his “job”, and they’re working together, because the online income is supporting the whole family.)The goal is not the point – the united two into one makes the difference. Yes.  A goal has united two into one.

A goal has united two into one. #marriage Is this – two into one – going to be difficult? Maybe. But you’re not alone…

You’re not the first couple to do this. In fact, you’re probably surrounded by more couples living this “two into one” journey than you notice. Some are doing it well. Find them. Identify them and spend time with them.

But most of all, you’re not alone because there’s someOne else who wants to support you two in your love… your loving Heavenly Father. God.  His Son, Jesus. You are not alone in your journey to become two into one.

Honor your role as husband and wife.

Bring honor to the titles “husband” and “wife”.

If it’s been hard these last few days, months or years… begin now. How you live – honoring your vow, sharing an outlook, and pursing goals – makes a difference for your kids, for your families, and community.

Oh, please – don’t give up. Don’t give in. Don’t just walk through life day-after-day…  There is more to your marriage than you’ve ever imagined!

Your great marriage can have a positive impact on everyone! Take a look at the book on Amazon!

In this book, the nine reasons we all procrastinate are spelled out in detail as they appear in marriage, and solutions, and strategies are suggested for each area.

The goal is translating what you learn about procrastination in your marriage, to the rest of your life - so as husband and wife you're leading a meaningful life!