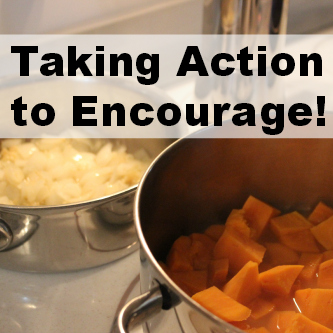 Cooking is not my favorite thing to do.

Like most married people, responsible for feeding the mouths in the house, I’ve perfected a few favorites. And when all else fails, there’s always sauce from a jar dumped over spaghetti.

Yes – I can hear all you chefs, and cooks, and gourmet people who actually LIKE to cook gasping… 😉

There’s one glitch in my philosophy:

My husband likes to eat!

Robert is pretty easy to get along with about food. He’s happy with left-overs, and never complains about having “that” again. But a great meal is certainly one way to perk him up.

Encouragement to try something new.

One of my favorite blogs to read is by two friends – Tammie &  Alessa – called Carolina Heart Strings.  A few weeks ago they wrote about a recipe for Sweet Potato-Cider Creamed Soup.

I was intrigued. It had all the ingredients to perk up my hubby…

AND it seemed easy! And then it was time to cook…

I cheated a bit and cooked the sweet potatoes in the apple cider, but did follow the instructions by sauteing the onions and garlic in bacon drippings. It smelled delicious! (Robert came out of his office and down the hall to investigate the yummy smell – anticipation is part of the joy, eh?)

After mashing the potatoes I added the spices – cinnamon, nutmeg, and ginger. (the ginger was suggested by another commenter on the post) I couldn’t find any paprika in my cupboard, so I left it out…

Then I finished the soup according to the directions, and served it! Robert was impressed – it was sweet and tangy at the same time. He said this would fit into a fancy restaurant any day!

And since we’ve become soup connoisseurs after our 12 days of soup, I think you can trust him 😉

Thanks for the encouragement, Alessa!

Sometimes the cook needs to be encouraged to try something new – and that, in turn, encourages her/his spouse!

When was the last time you tried a new recipe that you knew your spouse would like? What was it?

Encourage Your Spouse – Support with Action!