Procrastination is a Poison in Your Marriage 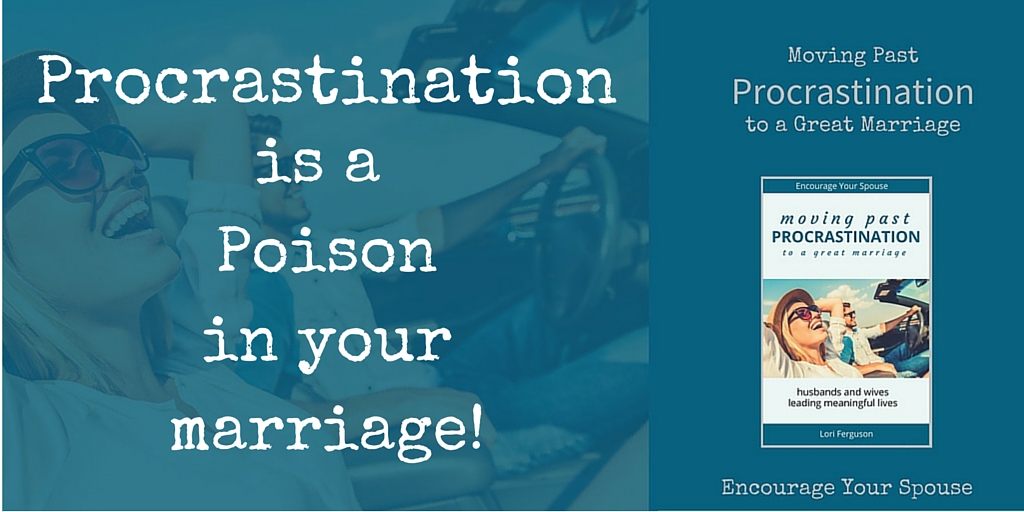 Here’s my confession:  We have a small issue with doing things at the last moment. Sometimes it’s a time management issue – sometimes it’s a procrastination poison. And when I say “we”, I mean me. And Robert. And our adult kids.

Are you seeing a trend? We have a new grandboy, and I really don’t want to pass this trend on to the next generation… Our family’s inside joke is to use the hashtag  #fergusontime — usually in a text to each other when we’re running late.

Being Aware of Procrastination

Exactly. In detail. What am I afraid of? By being brutally honest with myself over the reason I’m procrastinating, I can address the fear (and it’s usually a stupid fear), to develop a solution, work-around, or strategy to begin – or more often, finish -whatever I’m avoiding. Yeah. I’m a great starter, but haven’t been as successful at finishing. Yet.

Here are 9 reasons we all procrastinate:

Have you ever encountered any of these issues?

I’m going to guess that you can relate with one or more of these nine reasons to procrastinate. I’m going to suggest that you’ve encountered them in many areas of your life; in your job, in your household work, in your health, in your fitness, in your undeclared goals (like writing a book, running a marathon, starting a business etc.), in parenting, and in relationships.

Do you ever procrastinate when it comes to your marriage?

Where has procrastination crept into your relationship with your husband or wife?

I’m guessing you’ve used all these nine reasons to procrastinate in your marriage relationship at various times, for varying reasons…  I just need to say:

Procrastination is an enemy of encouragement.

Yes. Just like procrastination is an enemy of achieving anything in life – succumbing to procrastination ensures you’ll never encourage your husband or wife.  And… next I’ll have the audacity to take it further:

Procrastination is a poison that causes good-hearted people, married to each other, to:

Sounds pretty grim, doesn’t it… As I was researching, I realized how damaging procrastination really is to marriages.

And the realization that procrastination is poisoning marriages got me to take action… I kicked my own proclivity to procrastinate to the curb, and !finished! a book. Moving Past Procrastination to a great marriage!

In the book I detail all nine reasons why we procrastinate in our marriage, and provide work-arounds, solutions, and suggestions to move past those procrastination poisons

If you’ve ever procrastinated in your marriage,

you’ll find this book valuable. Check it out!

The book is also available in paperback.

What if you want to get the free digital version, but don’t own a Kindle eReader?  You can download the Kindle app to your smartphone, tablet, or computer. Click on the picture below to learn how.

Has procrastination impacted your life?

Is procrastination a problem in your marriage? You might be surprised…