If you could say thank you to your spouse… 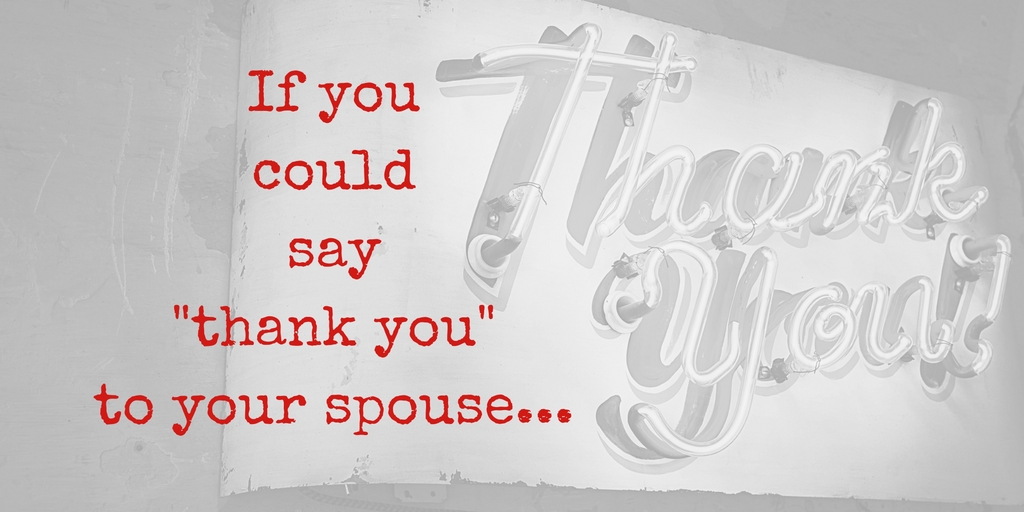 If you could say “thank you” to your spouse, what would that statement entail? Make your “thank you” be about the person she/he IS… not only for what they DO… Does the person you married – the one you love more than any other human on this earth – know how much you value him/her? And for what?

Let Me Count The Ways

There’s a poem by Elizabeth Barrett Browning detailing how she feels about her husband: “How do I Love Thee? Let Me Count the Ways”.  (It’s a beautifully touching poem. If you haven’t read it— click the link — it’s only 14 lines.)

The above poem came to mind when I read the second prompt in the 30 Days of Gratitude Challenge: “The Loves of My Life: Why I want to thank them for being in my life?”  For the month of September 2016 I’m refocusing on gratitude. On being thankful. These are excellent prompts for husbands and wives to ask each other…. (Learn more about the challenge here.)

Could you list all the ways – all the reasons – you’re thankful for your spouse?

Is your spouse especially patient? What about being resilient? Are you thankful your spouse is a wonderful parent? Or do you thank God for the way your spouse navigates every challenge? Again – it’s not about their actions.. but rather their character.

What are the positive character qualities you admire about your spouse?

Character. It’s all about the inside stuff.

Robert and I’ve been together since we were 15 and 17. Four years later we were married. I’ve known this man for 36 years – and he’s always been one of the greatest blessings in my life. (I thank God for him every day.) It’s not about what he does… it’s about who he is! I have to tell you that I took the easy way when making this list. A while ago I made a resource – 276+ Character Qualities – and I looked at those words as I wrote the list above.

Make it a priority to say “thank you” to your spouse!

Sometimes we don’t know where to start to say “thank you”… so we don’t begin. This resource will help you start. The #30bbdaysofgratitude by Aurélie has 30 prompts with questions for each day in September.

Today’s prompt and question is: The Loves of My Life: Why I want to thank them for being in my life?

Though I’m adapting the prompts and questions for husbands and wives here on EncourageYourSpouse.com, I thought I’d also give you all a glimpse into the other “Loves of My Life” – my three children and why I’m thankful they’re in my life… So – I gave birth to the two on the left of the picture – Alex and Sarah – and then Alisane became our daughter-in-love in 2010. I’m beyond thankful to have these three adults in my life – I admire them greatly. Here’s a small taste of what I’m thankful for…

My three children are a beautiful gift from God. I give thanks for them daily. He’s 8 months old and what is keeping us tethered to North Carolina… but we’re very thankful for him. I “grandparent” him two days a week, so we’re getting to really know each other well. He’s exploring his world. And learning how to get his own way. I’m thankful to hold him as he sleeps, to sing songs to him, to read books and say silly nursery rhymes with funny voices. Yes. I’m thankful to watch him grow from an infant into this engaging and willful and loving and laughing little human.