Ways to Reduce Friction and Resistance in Marriage 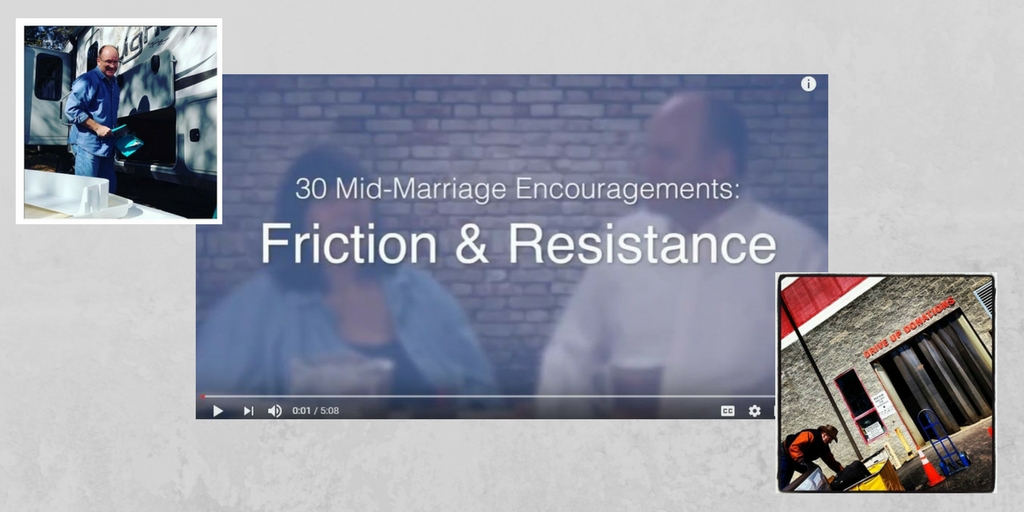 Are you dragging? Maybe it’s time to reduce the friction and resistance! 😉

One caveat about neatness:

Make it about caring not control! Robert wrote a post from his perspective during our series on Values in Marriage.

Being neat reduces the friction and resistance in marriage.

As we mentioned in our 9th mid-marriage video, Robert is the neat one in our relationship. Me? Not so much! However, I have improved because of the two suggestions in our video.

Moving is good for one (of many) things: it forces you to look at all you own.

Each time we moved – from Canada to Texas, and from Texas to North Carolina and finally into an RV – we had to assess each item and decide if it still fit into our lives. Most times the answer was a resounding “Nope.” Have you faced a move recently? How much did you choose to donate, sell and/or throw away?

Ways to Reduce Friction and Resistance

Maybe you don’t need to wait till a move? Maybe you could begin this process now?

This is exactly as it sounds. Take three bags or boxes and walk through your house, choosing things to donate, toss in the garbage or sell. Don’t be hard on yourself. Just begin.

When and what should you sell or donate? The obvious answer is to sell stuff to make some money if you’re not using it. However, it’s not always that obvious… the same is true for when and what to donate! Here are ideas from the “Get Organized Wizard”:

When you’re decluttering, only allocate something to the ‘Sell’ pile if:

1. It’s worth more than it would cost to organize the sale (list online, hold a garage sale, etc), and

2. You can be bothered to do the work to organize the sale.

The second point is crucial. If you know you’re unlikely to ever get around to doing what’s needed to sell your items, then save yourself time and guilt and don’t tell yourself you’ll sell.

Only allocate something to the ‘Donate’ pile if:

We did sell some items but donated quite a bit when we moved out of the house. It was easier to live in 282 square feet without that friction and resistance! #2 – the habit of tidying up each day

I found “The FlyLady” many years ago. (It might even have been before we moved to the United States. Wow – that was in 2000.) She had created a system to make it a process to keep your space tidy. I found it easier to homeschool because she was all about small steps, and daily actions. Her ideas really helped me, so I thought I’d share… these are only three of many ideas.

Shine your sink – this is your first task as a FlyBaby, and also the foundation of FlyLady. It all begins with a shiny sink!

Getting dressed to shoes – FlyLady believes that you feel and act differently when you are completely dressed with shoes on your feet, even if you’re not leaving the house. It makes you feel ready to go!

Her foundational system is through an email a day which costs nothing. If you’d prefer, there’s an app, but that has a monthly cost. Look through her site, and try the emails for a week or so. You might be surprised.

When should you reduce the friction and resistance in your life?

Again, this might seem obvious. Maybe it’s not. Think about it…

Perhaps you haven’t truly considered why you’re feeling annoyed with your space or your spouse.

You may not need a larger house. Or a different spouse! 😉

Maybe all you need is to cut out some of the drag resulting from too much stuff! (Just a thought.)

Need to reduce drag in life? You might not need a larger space or different spouse…