I’ve been searching for couples living in the public eye, who value the encouragement their spouse provides. Because I don’t know them personally, the only way I can gauge their appreciation is by their outward, public behavior and written words.

Robert and I have been reading John Maxwell’s books for almost 10 years and have attended a couple of his conferences. We find his leadership books, both secular and faith-based, valuable.

John often refers to his wife, Margaret and her role in his life.

In one of his latest books, Put Your Dream to the Test, he both dedicates his book to Margaret but also tells a very moving story of how she made him feel empowered in his dream to be a great leader.

On page 115-116 he tells how, shortly after finishing college and getting married, his first church in rural Indiana could only offer him a small $80 a week salary. And even though it was a part-time salary, Margaret supported him in giving all his energy to the church.

She declared his dream verbally to the church leaders and followed through with her encouragement by working three jobs so he could feel empowered to pursue his dream to be a great leader.

None of my dreams would have come true without her.

Margaret Maxwell’s encouragement and support of her spouse has definitely made a difference in the world! She is a great example. 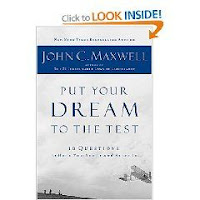 Take Action.  Support your spouse.
It will make them feel empowered!