How to Make the Most from your Couple Friendships 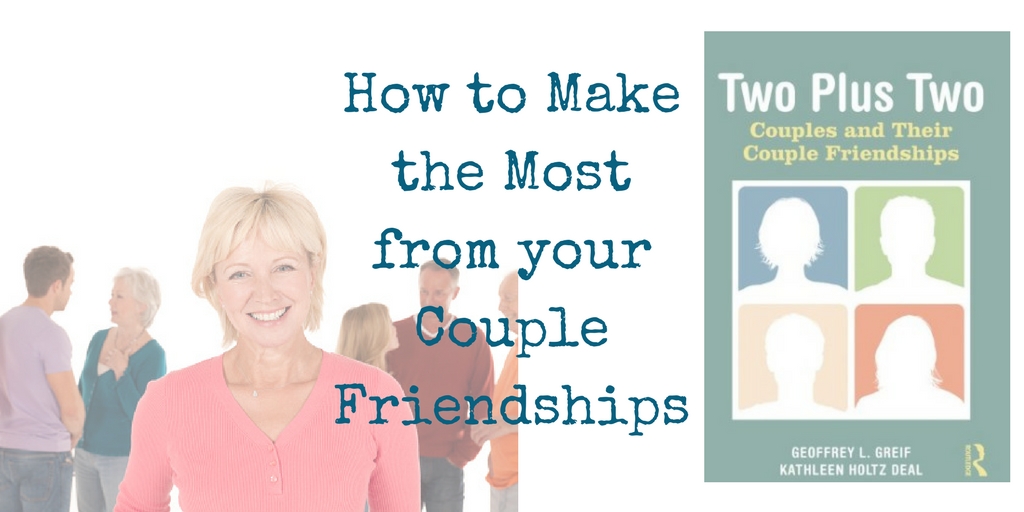 How to make the most from your couple friendships? Well, there isn’t a lot of information in this area, but we found one book that’s well researched and has easy to remember concepts.

Two Plus Two: Couples and Their Couple Friendships is authored by two psychologists: Kathleen Deal and Geoffrey Greif.

They’re both professors at the University of Maryland School of Social Work. But more importantly to us is the fact that they’re both in a long-term marriage. Geoff has been married to Maureen for more than 35 years. Kathy has been married to Dave for more than 40 years. They both know what it’s like to be in the middle of marriage, how to be a friend to their spouse, and how to build friendships as couples.

They’re not just talking theory on how to make the most from your couple friendships – they’re living it!

Research Concepts from Two Plus Two

What struck me first about their research is how easy it was to understand.

In the book, Two Plus Two: Couples and Their Couple Friendships, they begin by reinforcing the need for friendship between husband and wife, referring to John Gottman’s research:

…mutual respect and enjoyment of each other’s company. They tend to know each other intimately – they are well versed in each other’s likes, dislikes, personality quirks, hopes and dreams. They have an abiding regard for each other and express this fondness not just in the big ways but in little ways day in and day out.

And then go on to cite many other researchers’ points on why friendships are a healthy part of life. I found it interesting and helpful how they dealt with some of the factors that make friendships with other couples both a challenge and a joy:

After researching they’ve come to the conclusion that there are two ways of thinking about couple friendships: Style and Interaction. These two concepts are going to help you navigate how to make the most from your couple friendships.

Seekers. Keepers. Nesters. It’s easy to imagine what those terms mean, right? Here’s the thumbnail sketch provided in the book, Two Plus Two: Couples and Their Couple Friendships

“The most outgoing couples we call Seekers. These couples seek other couples for social, intellectual, and emotional stimulation. Both partners enjoy the company of others.

A second, and the largest group of couples, are ones we call Keepers. They tend to see couple friends as an important but not vital part of their lives. They have a significant number of friends, are close with those friends, and are not too interested in making new couple friends.

Nesters. A third group of couples that we see from our research are those that are not particularly interested in couple friendships. Either or both partners do not place a high value on them,and they are content to just spend time with the other partner, with their individual friends, or with one or two close couples. They are not oriented by personality style to a great deal of socializing with other couples. We call them Nesters because, without putting any value on their behavior, they are content to be in their nest with just each other or with a small group of friends. Some Nesters found each other late in life or in a second marriage and are fiercely protective of the time they have.”

Moving forward in the book, from Greif and Deal’s research they show how these three styles of interactors “live out their friendships and how a couple’s interaction style affects what they do when they get together.”

What we need to know is that each couple might have different friendship styles. For example, I’m a Nester and Robert is a Keeper in couple friendship styles. Or, (to add complexity) an individual in a couple relationship could have an affinity for two of the three styles…

Bottom line? Knowing each other’s friendship style is important when you’re negotiating who you’ll be spending time with, and how often, and how to make the most from your couple friendships. In their research, Greif and Deal suggest that more than two-thirds of those they interviewed identified with the fun seeking description in couple friendships. They hung out together, and the emphasis was on “doing something”. Most often the Fun Seekers had children under 18 in their home, in comparison to couples who leaned toward emotion sharing friendships who didn’t have dependents living with them.

Others referred to the best kinds of couple friendships as being able to do both – share emotions, and thoughts along with enjoyment when doing things together.

Final thoughts on Two Plus Two

Well – there probably won’t be final thoughts on this book..  😉  There’s so much to ponder and review.

It’s a book heavy on theory, research, notations, and citations, etc. What makes it readable for a non-academic is how the authors have woven in the personal stories of the couples they’ve interviewed. Those stories make the theory real and relatable to make the most from your couple friendships. From all the chapters, these are the most practical:

The whole book is fascinating if you’re someone who likes to gather insights and data. It felt like candy to me… 🙂

But I need to be clear with you — this is NOT a self-help book.

There aren’t “x” number of steps to make better friendships… It’s about research on the topic. And from the authors’ view, this might be the only book on this topic.

Why are we talking about this book?

Our discussion started with our first mid-marriage encouragement topic: making new connections in the middle of marriage… and how hard it is! We challenge you to reach out and make new friends!

Don’t let the age or stage or your marriage deprive you of the depth that good friends can provide for your life.

Who could you call today – and make a time for a double-date?