Check In With Each Other- How Are You Doing? 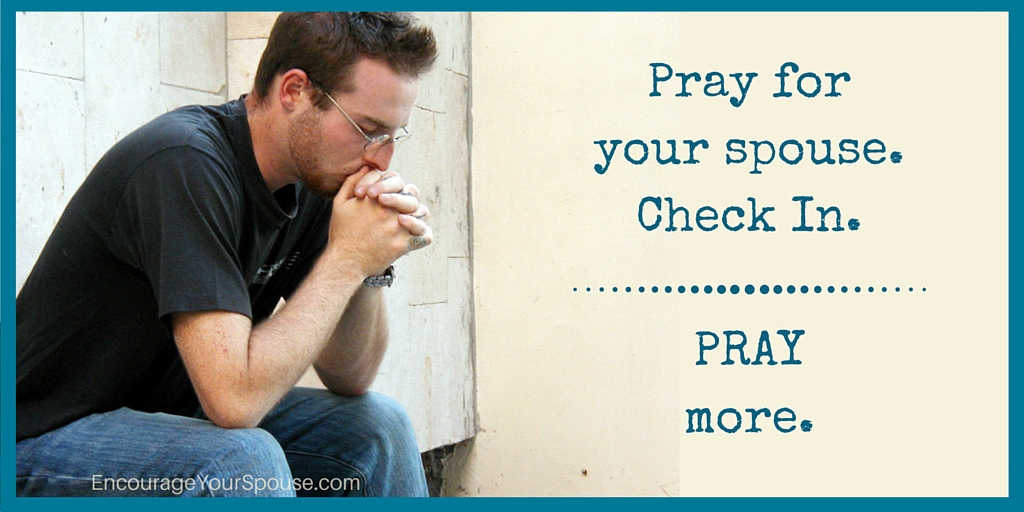 Check in with your spouse – especially if you’re going to pray for her – for him. It’s a good idea. And we have a suggestion for you, even if your spouse isn’t very chatty about how they’re feeling, or what they’re concerned about. Why check in? We know you want to pray for your spouse.

We imagine you want to pray for your spouse. But what – exactly – do you pray for?

For a while (and still every now and again) I’ve worked through a list from Stormie Omartian’s book, “The Power of a Praying Wife

“. It’s a powerful book. (pun intended). Areas she’s written about to focus on are his job, his health, his relationship with God, his thoughts, etc. They’re all are covered in the pages of this book. (There’a companion book for husbands also.)

But what about specific areas? How can I know what to pray for in specific, targeted things Robert is worried/concerned about? And how does he pray for me? Well…  we do a check in with each other.

How to Check In With Each Other

Here’s one practical way Robert and I use to check in on each other: After we check in with each other, on our best days, we are GREEN across the board, under all four areas: physical, mental, emotional and spiritual.  (I don’t know where we got the idea of these four areas and checking in on them, but it’s been working for us for years.)

Green across all areas – how often do you and your spouse check in with each other?

How does it work for us?

If Robert seems weighed down or not at his best, I ask him how he’s doing, and he responds with each area and a color. If we didn’t use this idea, I could guess… and maybe I’d be right. Maybe sometimes. Or maybe not much.

Guessing why your spouse is acting a certain way rarely works. Check In First!

Don’t guess. Guessing why your spouse is acting a certain way rarely works. Check in with each other.

So many misunderstandings could be avoided…however, some spouses don’t share – or can’t share – exactly what they’re feeling. That’s why using this list of four areas – physical, mental, emotional and spiritual – along with a color to describe how they’re feeling is a good way to begin. And then you know exactly how to encourage your spouse!

When you know what’s not GREEN then you will know how to encourage. And in everything, you can surround her/him in prayer!

Check in with each other – often. Be constant in prayer.

Here’s the book by Stormie Omartian I so enjoy using.

There’s a guy’s version also: The Power of a Praying Husband Encouragement Notes
... be encouraged and become an encourager!

Receive notes of encouragement - ideas to strengthen your marriage and enrich your life.