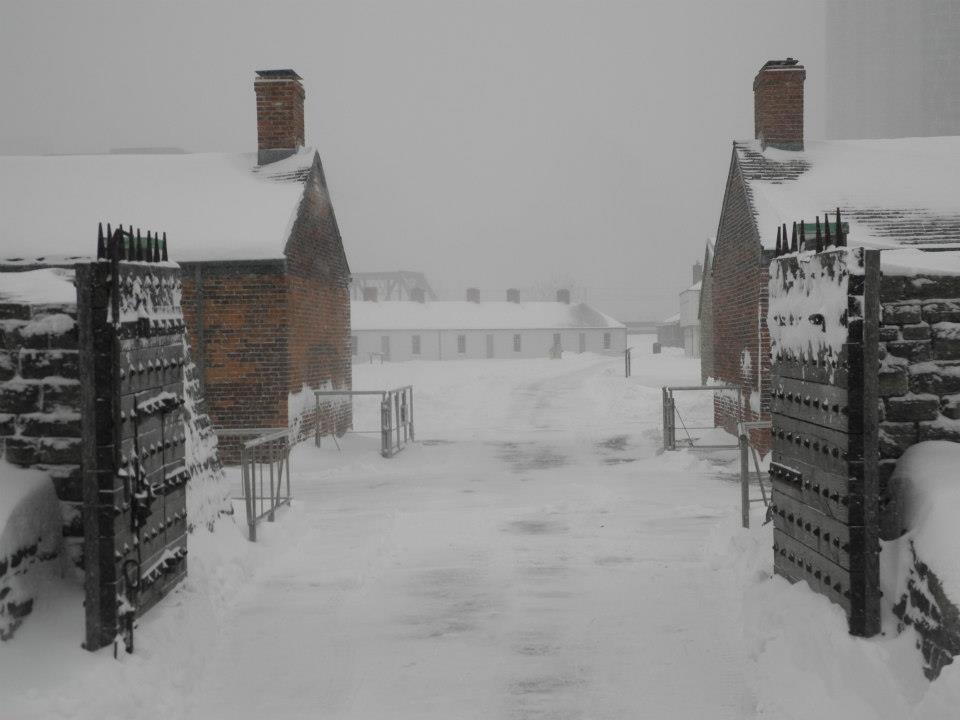 30 years ago a young couple borrowed their parents’ car for a trip to the big city. On that Monday in February 1983, it was sunny with snow on the ground, but not on the roads.  After an hour and a bit of driving they made it to their destination – Historic Fort York.

The young man had a secret plan for the day, but his girlfriend of 3 years was only focused on spending a day with her best friend. They both had that Monday off work and had decided to take advantage of the opportunity to visit a few sights in the big city of Toronto. The trip was also a belated Valentines’ Day celebration because the fellow had been sick with the flu the week before.

Fort York was quite deserted with only a few visitors and a handful of staff .  They were alone in every building – except for a friendly cat in the officers’ dining hall. They wandered around the different barracks, and finally, all alone inside the officers barracks, the young man slipped on one of the red, British soldier re-enactment costume jackets (just a costume – NOT an artifact) hanging on a rack.  He pretended to salute her, and then had his girlfriend sit on some steps leading to a second story of the building.

He got down on one knee and asked the young woman if she would marry him.  She smiled, and accepted his proposal.

It wasn’t the first time they’d talked about marriage, so this (seemingly) impromptu proposal was fun and romantic. They laughed together, he took her hand and helped her up from the stairs, they kissed and carried on viewing the fort.

Once they’d seen everything, they headed back to the car. She got in the front passenger seat. He first opened the trunk to get something out, and then got in the driver’s seat. He started the car, because it was cold outside, and turned to his girlfriend, holding out a box.

“Here.”  he said, holding out a jewelry box.

“Oh, no!” she thought with panic, “He was serious – he really did propose!” If you’re a wife – did you know your husband was going to propose?  Were you surprised? Did you say “yes” right away? If you’re a husband – did you plan something special, was it a surprise?  Who proposed – man or woman?

I wasn’t surprised at Rob’s proposal, because we were serious about each other, but I truly was surprised when Rob handed me that ring – it suddenly made our plan to marry “real” – and that was scary.  (be careful what you say “yes” to – huh? 🙂  )

It happened that he had the ring on Valentines, but was sick with the flu. I remember visiting him on Valentines – we spent the evening together, and he said that he was so tempted to propose that day, because it was his plan. (Rob has always been goal and plan oriented!)  Fortunately he decided against proposing while he was so ill – his explanation was that he didn’t want me to remember for the rest of our lives that he had proposed lying in bed, white-faced and shaking with fever.  I appreciate his thinking – our story is much nicer this way!

What is your engagement story?

How many years has it been since you proposed or said “yes”?

If you’re interested, here’s a short video showing more of Historic Fort York – from the war of 1812 where the future Canadians (Colonial British with native Canadians) defended themselves from the American invaders!  Historians are still arguing about those battles. Last year was the celebration of 200 years of peace between Canada & the USA.

The photos above are screen captures from this video – and a photo from Wiki-Media Commons.  Take a look at Fort York’s Facebook Page for more photos and information! (there are 12 snowy photos from February 2013)